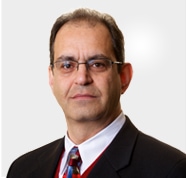 Most recently, Mohammad served as Chairman of the Board for SoleNet, Inc., an engineering services company focused on developing state of the art communications equipment. From 2006 to 2007, Mohammad served as Vice President Engineering for RFID at Motorola, Inc. His responsibilities included advanced development and architectural design of Radio-frequency identification (RFID) equipment. While in this position, he led a team of about 40 SW and HW engineers. From 2004 to 2006, Mohammad served as Vice President of Engineering at Matrics, Inc/Symbol Technologies, where he was responsible for SW and HW development of RFID readers. Before joining Matrics, Inc/Symbol Technologies, Mohammad founded Sole Net, Inc. in 2001 and co-founded BitCom, Inc. in 1998. Mohammad also spent fifteen years as Senior Director for Hughes Network Systems (HNS), where he obtained tremendous leadership experience. He first served as Co-lead System Engineer for Thuraya, a mobile satellite voice and data communication system based in the UAE. He later became the Lead Systems Engineer for ICO, a Medium Earth Orbit (MEO) mobile satellite system for voice and data communication. He also became Lead Engineer for the first phase of DirecTV receivers.